It’s no secret–Federal agencies are on the move to the cloud. We’ve seen the legislation and read the reports; the move to commercial cloud continues to march on. It’s a streamlined solution that offers cost savings, flexibility, innovation, and security.

In response to the growing government cloud migration, we’ve worked with Amazon Web Services to conduct a weekly poll gathering opinions on cloud adoption from Federal IT professionals–where we are, what’s working, and what lies on the road ahead. Here are the key findings from our first month:

While the majority of Fed IT pros are noticing cloud progress, 83 percent feel the pace is still too slow. 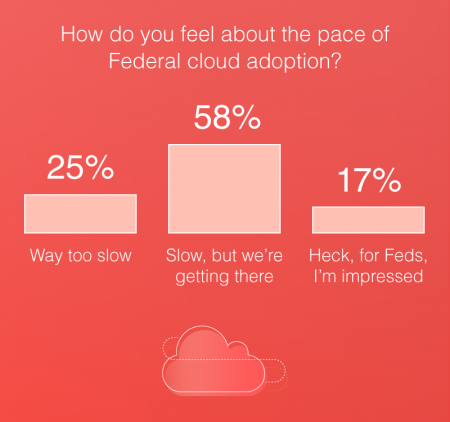 While the Modernizing Government Technology (MGT) Act should help, Feds* don’t see it as a quick fix–the majority (57 percent) say MGT is at least two years out from accelerating cloud adoption. Even if cloud adoption were to ramp up, many would still need to formulate their modernization plans. More than 40 percent of survey participants said they were unsure how they would modernize a workload (migrate it or build new) if their agency received a cloud investment windfall.

Sixty percent of Feds say they access the cloud for work every day–with more than a quarter (34 percent) saying they access it multiple times in a day. 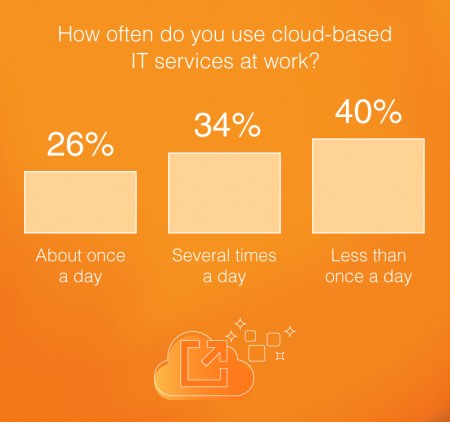 Still, Feds are split on the impact cloud is having on their role. While 39 percent say cloud has made their job easier, 28 percent say it has made it more difficult. The rest of the community is unsure what bearing–if any–cloud adoption has on their job to date.

Despite differing impacts on their day to day, 42 percent say they would prefer to store their most important work files in the cloud.

The vast majority of Feds (65 percent) say the most ludicrous statement people use to not go to the cloud is that it’s not secure enough. 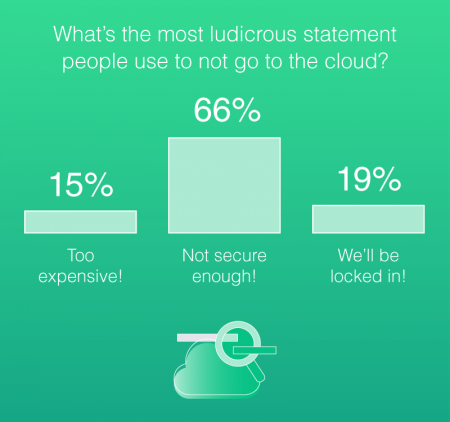 Still, there’s an education issue to overcome. When asked if they thought the average Federal employee trusted the cloud, just 26 percent of survey participants said yes. It was not that long ago that Federal IT employees we’re doubtful of the cloud–and if they could place their trust in its security. The uncertainty started to dispel as commercial cloud providers proved themselves by meeting Federal security requirements. So, while agency leadership (51 percent) and the IT community (38 percent) are almost equally insistent on cloud adoption, it’s the average Federal employee–the end user–that must work to educate and get on board.

Despite a few growing pains, the future of Federal cloud looks bright. Seventy-six percent of Feds say the best is yet to come for cloud in government. 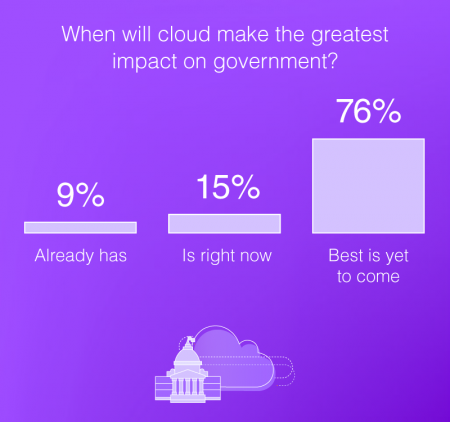 Feds envision cloud will have a widespread positive impact over the next five years–with the greatest improvements in Federal customer service. Sixty-eight percent also say cloud will help support the success of AI.

Even with limited adoption, Feds can already see what the power of cloud has in store for future technologies and citizen service.

Do you agree or disagree with our survey participants? Make your voice heard this week as we dive into our next set of questions on cloud momentum.

Read More About
Emerging Tech
Cloud Computing
Recent
More Topics
About
MeriTalk Staff
Tags
Amazon Web Services
AWS
Cloud
Cloud Adoption
cloud migration
We use cookies and other tracking technologies to improve your browsing experience on our website, to show you personalized content and targeted ads, to analyze our website traffic, and to understand where our visitors are coming from. By browsing our website, you consent to our use of cookies and other tracking technologies.
Do not sell my personal information.
Cookie SettingsAccept
Cookies