Details
By: Demosthenes
5:00 am

In the Clinger-Cohen Act, which became law in 1996, there was a little provision that read:

FTS is an acronym for the Federal Telecommunications System. FTS 2000 was replaced by FTS 2001, which awarded long distance telecommunications service to Sprint and WorldCom, which then promptly went bankrupt and was acquired by Verizon. In March 2007 the follow-on to FTS 2001 was awarded and it was called Networx. It offers a broader range of services than the previous contracts.

Recent-ish data (right) indicate the extent to which agencies are buying those services. As you can see, virtual private network and managed network services comprise 60 percent of the spending on Networx.

The interesting thing is that when you look at this page, GSA doesn’t routinely identify the previous quarter. If you take that page and go to the Wayback machine you will find gaps in the data that GSA is reporting. The data that is reported over time is wildly inconsistent; sometimes a quarter, sometimes just a couple months. The only reason I can think of for doing this would be to obscure what the government spend is in this space. I suspect that GSA is only reporting data for the lowest cost quarter, though I have no way to prove that since they have the data and have chosen to not make it available. See, it is this kind of shit that makes people not trust GSA.

What do you think the biggest component of IT spending is? Contrary to common perceptions, network and telecommunications is actually the single biggest driver of IT cost in the Federal government. Don’t believe me? Check out the table below. 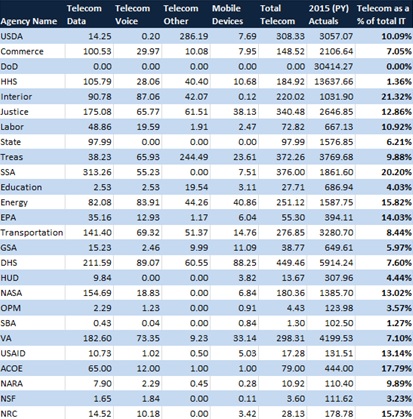 Let me tell you how I derived this data. First, I went into the data feeds for the IT Dashboard 2. I then grabbed the Infrastructure Spending Summary for all agencies. Then I threw away all the data except for the telecom data, telecom voice, telecom other, and mobile device data. I summed the telecommunications spending to identify a total telecom. Then I went and grabbed the total IT budget data 3. Finally I divided the total telecom by the total IT budget for each agency to identify the percentage of IT budget that is being devoted to telecommunications for each.

As you can see, however, from the OMB data, the Department of Defense is somehow special and chooses to not report this data. HHS and State seem to have chosen to grossly underreport this data. But I think it is significant when we see that 21 percent of Interior’s IT spending and 20 percent of SSA’s is going solely to network costs. People are so consumed right now with the amount of budget that is devoted to O&M. Guess what, this telecommunications spending makes up a significant portion of that O&M. Across all agencies (excluding DoD) telecom/network comprises 7.72 percent of the IT budget. My argument here is that we need to reduce these costs, and there is a lot we could do.