Federal agencies might not meet the Office of Management and Budget’s (OMB) data center closure goals, according to a new Government Accountability Office (GAO) report. Based on current projections, only 7,221 of the 12,062 data centers that agencies reported in August 2017 will be closed by September of this year.

OMB’s data center closure goals were prompted by the Data Center Optimization Initiative (DCOI), which was established in 2016 by then-Federal CIO Tony Scott in the OMB Memorandum M-16-19. The initiative fulfills the data center requirements of the Federal Information Technology Acquisition Reform Act (FITARA). Under DCOI agencies are required to develop and report on their data center strategies; transition to more efficient infrastructure, such as cloud services and inter-agency shared services; leverage technology advancements to optimize infrastructure; and provide quality services for the public good.

More than half of participating agencies reported that they had either already met or planned to meet all their OMB-assigned goals by the September deadline. However, 10 agencies–Commerce, Energy, Health and Human Services, Homeland Security, Interior, State, Transportation, Veterans Affairs, National Science Foundation, Nuclear Regulatory Commission, and U.S. Agency for International Development–reported that they do not have plans to meet all their assigned goals.

Although agencies have reported significant cost savings, more than a billion dollars of savings are being left on the table. According to the report, 20 agencies reported that as of August 2017, they had achieved $1.04 billion in cost savings for fiscal years 2016 and 2017. Additionally, the agencies’ DCOI strategic plans identify an additional $580 million in planned savings–for a grand total of $1.62 billion in savings for fiscal years 2016 through 2018.

While $1.62 billion may seem like significant savings, it falls short by more than $1 billion OMB’s savings goal. OMB initially laid out a savings goal of $2.7 billion–meaning agencies fell short to the tune of $1.12 billion. 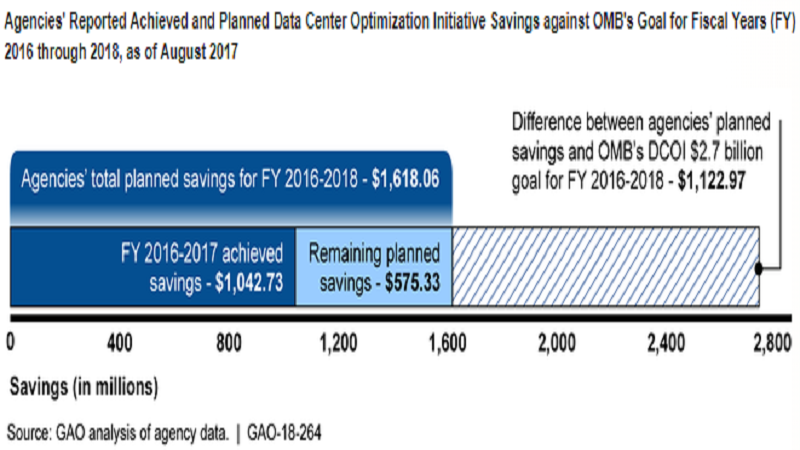 OMB included five data center optimization targets in DCOI: server utilization and automated monitoring, energy metering, power usage effectiveness, facility utilization, and virtualization. As with data center closure goals, agencies also reported mixed results in meeting OMB’s optimization targets. As of August 2017, only one agency–the Social Security Administration–had met all four targets. As for the other agencies, one met three targets, six agencies had met one or two targets, and a whopping 14 agencies reported meeting none of the targets. Additionally, GAO reports that most agencies were not planning to meet OMB’s fiscal year 2018 optimization targets. While four agencies reported plans to meet all of their applicable targets by the end of fiscal year 2018, 14 agencies reported plans to meet some of the targets and four reported that they do not plan to meet any targets.

Unlike the majority of GAO reports, the agency did not make any recommendations to agencies struggling to meet OMB’s goals. “While a number of agencies have ongoing discussions with OMB to revise their closure targets, even with the recent extension of FITARA’s provisions on data center consolidation, savings, and performance metrics, it remains important for all agencies to continue their efforts to meet their goals,” the report said. “In light of these agencies’ ongoing discussions with OMB, as well as our March 2016, May 2017, and August 2017 recommendations to the DCOI agencies concerning greater cost savings and improved optimization performance, we are not making any new recommendations in this report. However, we encourage the agencies to further their implementation of our prior recommendations.”

Kate Polit is MeriTalk's Assistant Copy & Production Editor covering the intersection of government and technology.
Tags
cloud services
Data Center Optimization Initiative
Government Accountability Office
Office of Management and Budget
Shared services
We use cookies and other tracking technologies to improve your browsing experience on our website, to show you personalized content and targeted ads, to analyze our website traffic, and to understand where our visitors are coming from. By browsing our website, you consent to our use of cookies and other tracking technologies.
Do not sell my personal information.
Cookie SettingsAccept
Cookies