FITARA ABCs: Does the CIO Make a Difference?

Nearly one-third of the agencies assessed under the FITARA scorecard are led by acting chief information officers, but these leaders are keeping pace with their permanent counterparts.

Of the 24 agencies that appear on the FITARA scorecard, seven are run by acting CIOs: the Environmental Protection Agency, Veterans Affairs, the National Science Foundation, and the departments of Transportation, Commerce, Energy, and Defense. 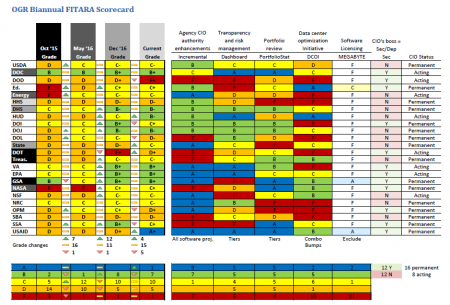 Overall, FITARA grades this time around dipped. However, the agencies run by acting CIOs did not seem to be worse off than those run by their permanent counterparts. Three acting CIO agencies—EPA, VA, and Commerce—received B’s. Energy and NSF received C’s. DOT earned a D, and DoD received an F.

Roger Baker of Roger Baker Consulting, the former assistant secretary for Information and Technology and CIO for the Department of Veterans Affairs, said acting CIOs do not make or break their agencies’ scores because they carry on the work of the permanent CIOs before them.

“They will keep marching down that path until there’s a new CIO,” Baker said.

DOT improved in its overall grades since the previous scorecard, which was issued in December. EPA, VA, DOC, Energy, and NSF’s grades all stagnated, and DoD’s grade declined. This trend is par for the course on this scorecard. Of the 24 agencies’ overall grades, four improved, 15 remained the same, and five declined.

Richard Spires, chief executive officer at Learning Tree International and former department of Homeland Security CIO, said the drop in overall grades was an expected consequence of a shifting administration.

“I’m not surprised. I think you would have a dip with the change of administration, or at least lose momentum. I don’t view it as an indictment of Federal IT,” Spires said. “An acting CIO wouldn’t have the ability to drive change the way a permanent CIO would.”

Spires noted that some acting CIOs are standing in for political positions that have not been filled yet. Of the four agencies where CIOs are politically appointed, three are currently led by acting CIOs: EPA, DOT, and VA. Spires said the administration has been slow to name people to these posts.

CIOs can be political appointees or career, noncareer, or general executives.

“Ideally, I think they should be career, so you can have some longevity. But you shouldn’t compromise, so you should be able to go to the outside if no one is ready,” Spires said. “That would be the best solution, except for the Federal CIO.”

The FITARA scorecard was designed by the U.S. Government Accountability Office and is distributed by Congress. Baker said a larger shift needs to occur within OMB’s enforcement of FITARA. He said OMB should grant or withhold funding based on how agencies perform. For example, agencies that receive A’s should get a small percent increase in funding and agencies that receive F’s should receive budget cuts and invitations for their secretaries to testify before Congress.

“Then you’d see a lot more people paying attention to the FITARA scorecard,” Baker said. “I don’t know if anyone thinks there’s any impact for not having a good FITARA score. The major question is what OMB is going to do about it.”

Rep. Will Hurd, R-Texas, said he has spoken with appropriators about how to get agencies to pay attention to their FITARA grades. Dave Powner, director of IT Management Issues for GAO, said four agencies called his office on the morning the scorecard was released to discuss their grades.

Hurd told MeriTalk on June 21 that FITARA needs more enforcement and that these questions about grades are a sign of attention.

“Pushback is a good sign,” Hurd said. “I think there should be an impact.”

Baker admitted that sometimes agencies with good FITARA programs get lower grades than they deserve, while some agencies are overrated.

“The end goal is better-run IT,” Baker. “Sometimes agencies that are well-run get low scores.”

Top of the Class

The U.S. Agency for International Development became the first agency to ever receive an A as an overall scorecard. Unlike the department of Commerce, which has hovered at either a B or a B-plus since the scorecard’s inception two years ago, USAID had consistently received D’s on the previous four scorecards.

Baker said Commerce’s consistently high scores are a bit of a mystery because the CIO of the department oversees many different components, for which standards can be hard to create. For example, Baker said Commerce’s CIO does not give the Census Bureau’s CIO IT instructions.

“It’s interesting to see Commerce so highly rated,” Baker said. “There are 12 rebel fiefdoms in Commerce.”

Alan Balutis, director of Cisco’s Internet Business Solutions Group and founding member of the Federal CIO Council, pointed out that GAO’s report accompanying the FITARA scorecard reflects a different span of time than the scorecard itself. GAO’s report, which was also released June 13, discusses efforts and people from a period that extends long before December 2016.

For example, the GAO report references projects conducted by LaVerne Council and Terry Halvorsen, both of whom have left their posts as CIO of VA and DoD, respectively.

Balutis also said it is difficult to measure the impact of acting CIOs across the history of IT modernization because, at any point in time, there are usually CIOs in charge at some agency.

“There’s probably always some who have acting, so it’s a tougher thing to draw on,” Balutis said.

Spires said the next scorecard, which will probably come out in December or January, will be particularly telling about the Federal IT modernization landscape. He said that agencies’ performance in the next six months will indicate how well FITARA is working. For now, though, Spires said he is cautiously optimistic.

“We might see a rebound. I’d like to see the scorecard show how to truly improve Federal IT,” Spires said. “Ultimately, that’s what’s going to drive improvement on Federal IT.”

Eleanor Lamb is a Staff Reporter for MeriTalk covering Big Data, FITARA, Homeland Security, Education, Workforce Issues, and Civilian Agencies.
Tags
Alan Balutis
FITARA
Richard Spires
Roger Baker
Will Hurd
We use cookies and other tracking technologies to improve your browsing experience on our website, to show you personalized content and targeted ads, to analyze our website traffic, and to understand where our visitors are coming from. By browsing our website, you consent to our use of cookies and other tracking technologies.
Do not sell my personal information.
Cookie SettingsAccept
Cookies