In light of the Federal Information Technology Acquisition Reform Act (FITARA), which was signed into law in 2014, and recent executive orders on the optimization of Federal IT, the DCOI aims to change the way agencies handle, and ultimately get rid of, their data centers.

Below are the core aspects of the DCOI:

“The CIO is the owner of the data center’s consolidation and optimization strategy. They are the ultimate decision-making authority,” said OMB Policy Adviser Sean Casey in a panel on OMB’s approach to FITARA on March 30.

As acting executive director of FITARA at the Department of Agriculture, Flip Anderson noted in a separate panel that day, this requires the CIO to be more involved in budgetary and project planning processes than usual, as they will be responsible for the ultimate result of those processes.

“One of the key differences between the FDCCI and the DCOI is around how data centers are categorized. FDCCI uses core vs. noncore, while DCOI is using a tiered vs. nontiered approach,” Casey said. This categorization mirrors what the private sector is already doing.

“The idea of nontiered was that keeping servers in closets at the end of every hall is not a very efficient way to do things, and it isn’t secure,” Casey said. “So we were trying to come up with a definition that captured that, but at the same time acknowledged differences between actual facilities and closets.”

This definition both allows for different types of data centers to be included, and adds server closets and the like into consolidation numbers where they were previously ignored.

“The March 19, 2015, Executive Order 13693, ‘Planning for Federal Sustainability in the Next Decade,’ requires agencies to install and monitor advanced energy meters in all data centers by September 30, 2018,” the memorandum says. OMB plans to enforce this by requiring agencies to install energy monitoring tools and to achieve and maintain a Power Usage Effectiveness of less than 1.5 by Sept. 30, 2018. Otherwise, agencies will be asked to consider consolidation or elimination of the energy inefficient data center. The memorandum also requires agencies to install automated motoring, inventory, and management tools.

“We would like agencies to stop relying on manual data collection,” said OMB policy analyst Michelle Bacon at the March 30 panel.

The memorandum lists a variety of metrics that will be used to measure data center optimization: 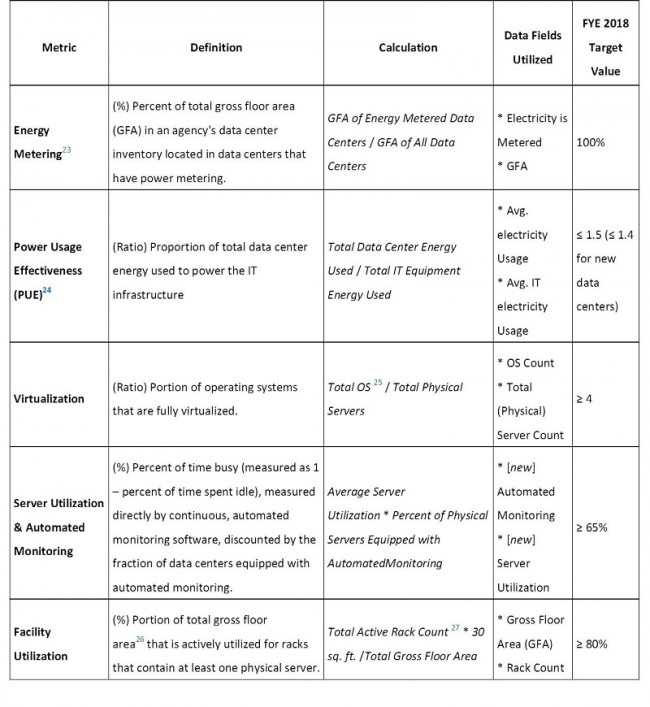 DCOI also sets a target for cost savings and avoidance as a result of data center consolidation and optimization.

“Over the course of the initiative, by the end of FY18, we will target a $1.4 billion reduction in annual spending attributable to physical data centers,” said Casey. “As agencies ramp up and work to achieve that reduction, cumulatively, over the three-year initiative, we will save approximately $2.4 billion.”

Agencies are required to publish annually a Data Center Consolidation and Optimization Strategic Plan, which would lay out their plan for the next three years and begin in fiscal year 2016.

Public commentary on the DCOI closed on April 1, meaning that there could possibly be changes to the details and structure of the memorandum that are currently in the works.

Data Center Refresh: A Special Report on the Future of Federal Data Centers

The Pros and Cons of DCOI

Inside The Pentagon’s Data Center Strategy

Jessie Bur is a Staff Reporter for MeriTalk covering Cybersecurity, FedRAMP, GSA, Congress, Treasury, DOJ, NIST and Cloud Computing.
Tags
Cloud
Data Center Consolidation
DCOI
FDCCI
Flip Anderson
Michelle Bacon
OMB
Sean Casey
We use cookies and other tracking technologies to improve your browsing experience on our website, to show you personalized content and targeted ads, to analyze our website traffic, and to understand where our visitors are coming from. By browsing our website, you consent to our use of cookies and other tracking technologies.
Do not sell my personal information.
Cookie SettingsAccept
Cookies